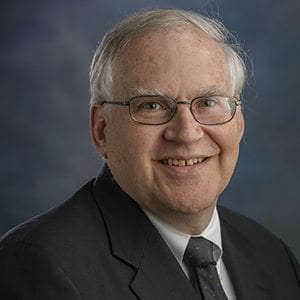 Magnets, lasers, fiber optics and portable X-rays are all commonplace, but their production almost always requires a class of matter known as rare-earth elements, a category that includes yttrium, scandium, gadolinium and lutetium and thirteen other elements. Despite their ubiquity in our products, the U.S. currently is reliant on international sources for these materials.

There could, however, be a time when some manufacturers can look for these resources in GSU’s Georgia backyard: New research from Dr. Crawford Elliott and Daniel Gardner, Geosciences MS 2016, found that Georgia’s rich kaolin (clay) deposits hold some of these critical elements, offering a potential and novel supply for manufacturers in several high-tech spaces.

On a macro level, the driving force behind the work is a question Dr. Elliott often addresses in his classes: Will we have the resources we need to sustain life on earth? But there was also an element of sheer curiosity. “I had been interested peripherally in the Georgia kaolins for years,” Elliott says.

It’s an important find, given the growing need for rare-earth elements as the world’s population demands more technology. “The REE are strategic metals,” Elliott points out. “We currently do not mine domestically the REE. The research results point to a possible resource of REE in the Georgia for the US.”

The work has led to a non-provisional patent application submitted by the GSU Research Foundation in collaboration with the Thiele Kaolin Company. Elliott is now working with current geosciences graduate and undergraduate students and colleagues with Thiele. He is contacting colleagues to build a team to find out exactly which minerals actually hold these rich rare-earth elements.

Send this to a friend